As we fast approach the excitement of the World Cup in Qatar, we don’t want to forget our canine friends who, over the years, have made many appearances on the field, and in some cases played better than the soccer players themselves!

But we need to start this roundup by remembering Pickles – without whom there would have been no trophy for the World Cup in 1966. 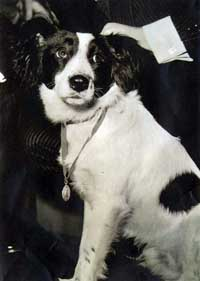 The World Cup trophy had been on display at the “Sport with Stamps” rare stamp exhibition taking place before the Soccer World Cup. Ignoring the more valuable stamps, a thief stole the famous 14.4 inch tall World Cup and sent the world of soccer into a tailspin. The top part of the trophy, along with a £15,000 ransom demand was left at Stamford Bridge, the home of Chelsea FC.

Cue Pickles! Whilst sniffing around on his morning walk, Pickles discovered the package which contained the rest of the World Cup trophy. It was a happy ending all round, and when England famously won the tournament, Pickles was invited to the celebration banquet; he was also awarded the silver medal of the National Canine Defence League.

But it didn’t end there! Pickles went on to become a star in his own right – he starred in the 1966 film “The Spy with a Cold Nose”, he appeared on various TV programmes and was named the “Dog of the Year”. His legacy continued after his death in 1967 when a fictional version of the story was told in a 2006 ITV drama “Pickles: The Dog Who Won the World Cup”. Pickles was voiced by Harry Enfield. 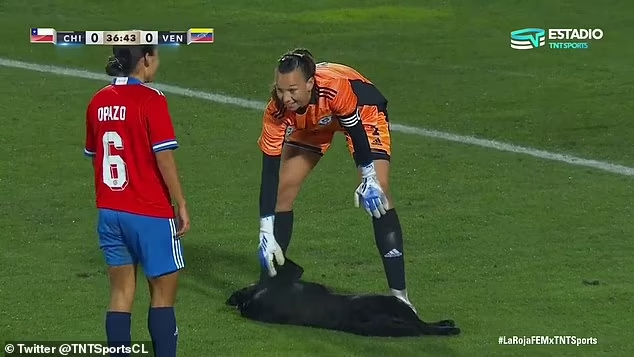 An international women's friendly match between Chile and Venezuela at La Granja stadium in Curico was brought to a standstill when an eager dog invaded the pitch.

The pooch must have wanted to bring some excitement to the game as, with the scoreline still at 0:0 after 36 minutes, he wandered onto the pitch then ran the length and refused to be removed.  A belly rub helped and, along with two players and another from the sideline, he was eventually gently carried away from the field. Venezuela went on to win the game 1-0 thanks to Mariana Speckmaier's strike, eight minutes from time.

A stray dog ran onto the pitch during a National Football League match in Gori, Georgia, to the delight of the spectators.

For around 3 minutes, the players from Dila Gori and Torpedo Kutaisi tried to chase the pooch off the pitch! He ran circles around the players, and took no notice of the off-side flag. However, after a belly rub from the goalkeeper he wandered off to watch the game from the sidelines. 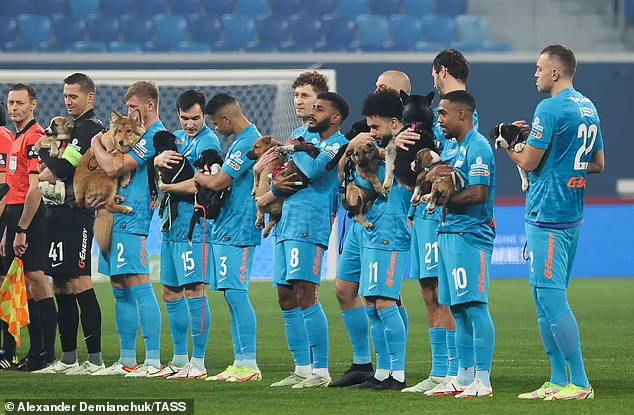 As reported in the Daily Mail Online, Zenit St Petersburg’s players carried shelter dogs onto the pitch when they walked on for their game against FC Rostov. As part of the “Dogs are better at home” campaign, they wanted to highlight to the public the responsibility and care required when having a pet and to help raise funds for local dog shelters.

What a pawsome gesture! 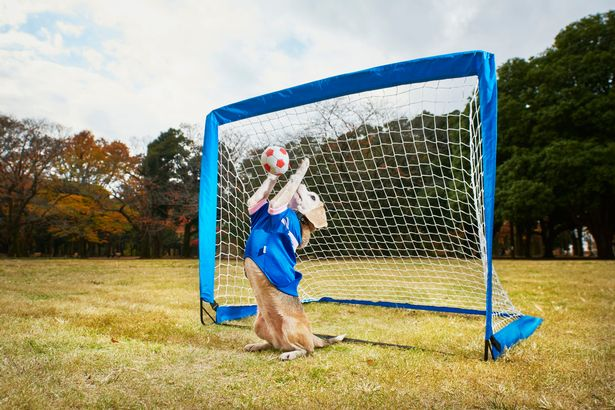 She loves to dribble up and down the pitch and is the best goalkeeper. Purin is a superstar in her native Japan and has been described as the ‘new Messi’. This multi-talented pooch can also skateboard, walk on two legs and skip with a rope.

6. Soccer included in training for ‘Hearing Dogs for Deaf People’ 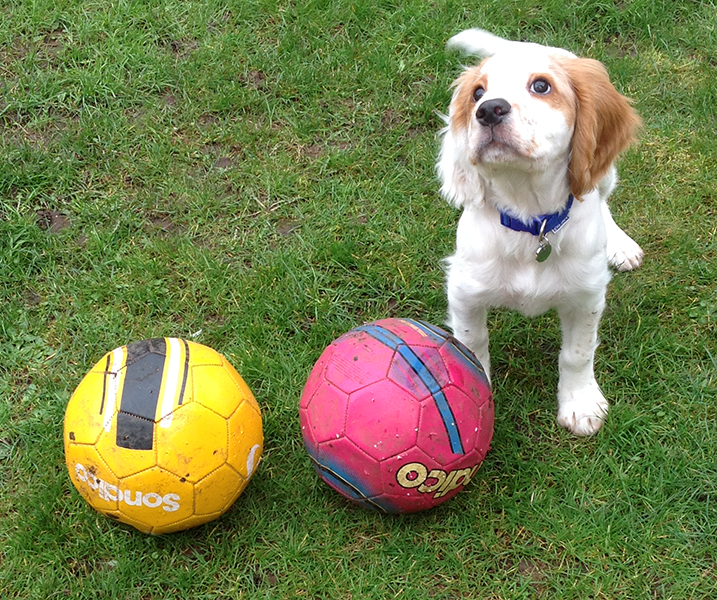 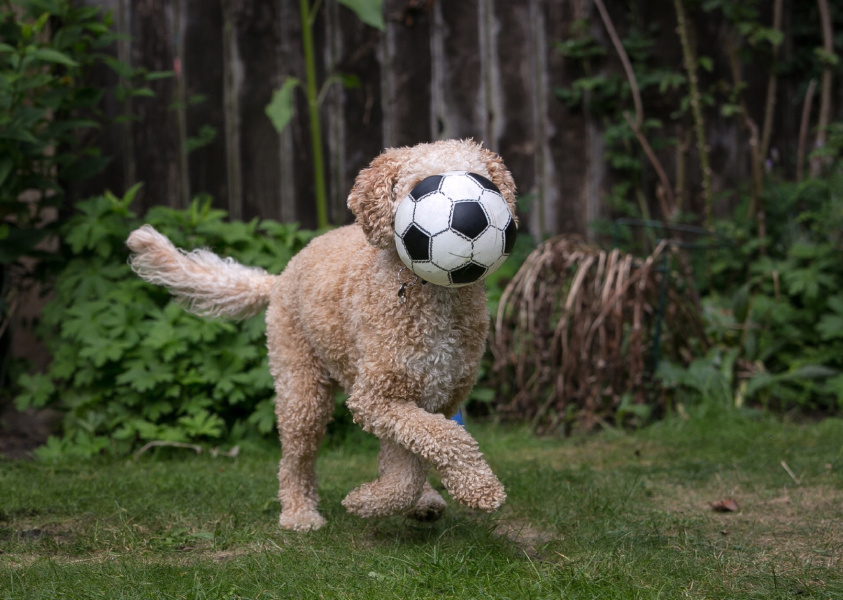 Having fun and playing soccer is just one of the training aspects at the Hearing Dogs for Deaf People in the UK. These soccer-loving pups go through vigorous training before they are adopted by people with limited hearing. They are trained to alert deaf people to important and life-saving sounds they would otherwise miss – such as the smoke alarm, alarm clock and even a baby's cry. Being aware of these – thanks to a hearing dog – makes a real difference to deaf people’s lives, and can even save them. Who knows, they may even teach their owners a few soccer skills too!

Mascots play a large role within a soccer team. A mascot can be an animal, toy, or symbol which is associated with the team, and is thought to bring good luck.

We may not have many here in Canada, but across the pond there’s:

The World Cup is an opportunity for the hosts to display their culture, people, food and their country for the world to see. Every four years, the host assigns a mascot for the tournament that will epitomize the best features of its nation and one that will inspire a wider audience to take an interest in the ‘beautiful game’.

Striker, the World Cup Pup was the mascot for the USA in 1994.  He was designed by the world-famous Warner Bros studio and donned the colours of the American flag. He was intended to represent the joy and energy that the game brings with it.

Although the World Cup 2022 mascot in Qatar is not canine, La’eeb is a traditional Qatari ghutra, who comes from an alternative universe inhabited by all World Cup mascots, including our canine ones.

La'eeb, an Arabic word, means 'super-skilled player' and according to FIFA, "will bring the joy of football to everyone".

9.  Jack and the Prince of Dogs:  World Cup Heroes 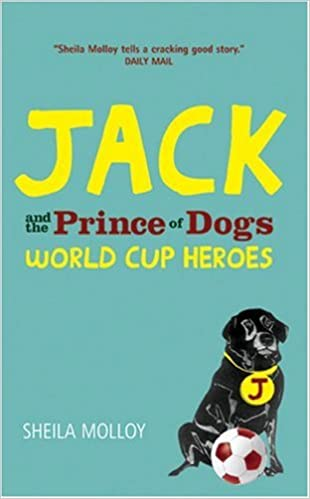 If you wish to encourage the younger members of your family to follow the World Cup, this book will help! It’s a heartwarming story of England's young soccer star striker, James, who has put the team through to the finals. All eyes are on his famous feet to carry England's World Cup hopes to victory until he is suddenly kidnapped. James' feisty little sister Annie and her dog Prince embark on an exciting mission to save him.

On their great adventure, they are helped by James' childhood pet, Jack, King of the Dogs, who sent Prince to look after Annie. The intrepid rescuers encounter great danger and excitement as the story races along to its dramatic conclusion.

However you and your dog enjoy the soccer; from watching together, to playing with a ball in the park - these stories should help you feel inspired and excited!

We’d love to hear how you plan to enjoy the World Cup together. Why not leave a comment to share your own soccer dog story!

Dogs have long been a lot more to us than just being a pet. My dogs certainly offer me some comfort ...

To celebrate the companionship, love and bonding with our furry friends, we’re taking a deep dive ...